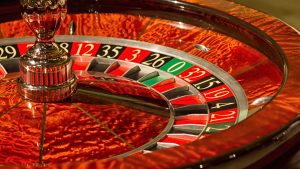 Gambling is only one of the many topics covered.  The programme also looks at how Las Vegas has diversified into many other attractions: exhibitions, live shows, museums and the arts.  Interviewees range from Mark Hall Patton (of Pawn Stars fame) to Marie Osmond.

Listen now on the BBC iPlayer.

For further info and transmission times please go to http://www.bbc.co.uk/programmes/p055jw30

On a trip to London last week I made a detour via Trafalgar Square to take these photos of Drummonds Bank.  Why?

Because the bank was already in existence on this site when Charles Deville Wells was active in London during the 1890s.  Wells, known as a “gambler and fraudster extraordinaire”, persuaded one of his victims – the Honourable William Trench – to back him in a phony patent scheme.  After handing over the equivalent of hundreds of thousands of pounds, Trench started to have doubts about the project, and when Wells asked for a further advance of money the young aristocrat hesitated.

Finally they agreed to meet at Drummonds Bank, where many wealthy people, including members of the royal family had accounts.  This was also where Trench banked.

Trench was persuaded to hand over a further large sum of money, but demanded that Wells provide security.  Wells offered two of his steam yachts and a smaller vessel as collateral, claiming that they were worth a substantial sum.

Predictably, Trench later discovered that the two yachts were virtually worthless, while the smaller craft had disappeared.  In company with Wells’ many other victims, Trench became resigned to the fact that he would never regain any of the money he had put into the scheme.  Twenty years later, however, in an extraordinary twist of fate, the situation changed dramatically …

Zoologist and film-maker Heinz Sielmann (1917 – 2006) was the German equivalent of Britain’s David Attenborough.  His extraordinary life and accomplishments are celebrated in a documentary on the NDR TV network this evening at 19.15 British time (20.15 German time).

Sielmann served in the German army during WW2 and was taken prisoner by British forces immediately after the German surrender in May 1945.  He spent a short time in a POW camp in Egypt before being brought to the UK.

As author of Hitler’s Last Army, I was invited to take part in the programme to speak about Britain’s treatment of German prisoners of war in the immediate post-war years.  Evidently the British considered him to be a reliable person who could be trusted to play a role in a new, democratic Germany.  He was repatriated relatively early to a country which at the time was still under Allied control, and this probably gave him a career advantage which served him well a few years later in the new West Germany.