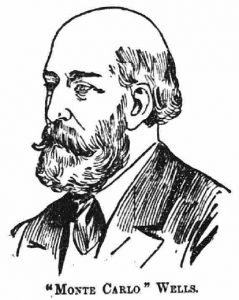 In this short series of blog posts I investigate some associates of Charles Wells who participated in his crimes, or at least knew of them.  It’s quite a short list because Wells usually preferred to act on his own.  In fact, when the French police contacted their British counterparts for information, a Scotland Yard detective had replied, ‘Wells was an exceptionally reserved man, frugal and simple in his habits.  He appeared to have no friends or relatives.’  It is stated in the same letter that he had only ever worked with one accomplice.  But this was not strictly true.

Around 1891, when Wells broke the bank at Monte Carlo, he was in close contact with a man named Aristides Vergis, who had already experienced at least one brush with the law.

A few years previously, Vergis had taken a job with a jeweller as a kind of freelance salesman.  He went to his employer with what purported to be orders from various customers for expensive items.  These were to be delivered to the clients, who would subsequently be invoiced.  But there was one little snag in this arrangement.  Most of the ‘customers’ had not really ordered anything; and some of them did not even exist.

For example, Vergis had told his employer that a Mr. Frederick Kaye had ordered jewellery as a wedding present for his daughter, and a stylish pin for his son.  The goods were duly sent to Kaye with an invoice.  But Kaye later testified: ‘I have no daughter … [and] I did not order a horse-shoe pin for my son.  He is only seven years old.  The first I heard of this matter was receiving the invoice …’

Shortly after being released from prison, Vergis set himself up as a yacht-broker, and opened a plush office in a fashionable part of London – an enterprise that was no doubt funded by his haul from the jewellery scam.  His business address – 37 Sloane Square – was situated within the Chelsea-Fulham-Brompton area of London which Charles Wells seemed to frequent: in fact, it was almost next door to the bank which Wells used.

Wells bought several yachts in the space of a few years, almost certainly through Vergis.  They included: Kettledrum (a 55ft. steam-yacht); Ituna (a 137ft. steam yacht); Wyvern (a 60ft. steam yacht which was wrecked while in Wells’ ownership), Flyer (a small steam launch) and another yacht, Kathlinda.  And in 1891 he purchased the Tycho Brahe – a former cargo ship, nearly 300 feet in length, with a displacement of 1,633 tons.  This he converted, at great expense, into one of the largest pleasure yachts in the world, and renamed her Palais Royal.  He appointed Vergis as his agent, and gave him a wide range of responsibilities, including selecting and appointing officers to command the ship.

When it seemed likely that Wells would be arrested on fraud charges, Vergis bribed an official with the sum of £5 (about £500 in today’s value) to find out whether there a warrant against Wells.  This gave Wells an opportunity to flee the country before the net closed on him.  Subsequently, having crossed the Channel in a bid to escape the British police, Wells was arrested on board Palais Royal.  In a letter from the local jail he asked Vergis to look after his mistress, Jeannette, while he was in captivity.  He also requested Vergis to arrange a defence lawyer for when he was brought to England to stand trial.  Their association ceased, however, when Vergis died in early 1895, at a time when Wells was part-way through an 8-year jail sentence.

Vergis has proved to be a most elusive character to research.  A factor which complicates matters somewhat is the spelling of his name, which appears in various records as Vergis, Verges, Vergie, and even Burgess.

I had long suspected that he was the man recorded in the 1891 census as ‘Arthur Vergis’, commission agent, living at 77 Bramber Road, Fulham.  This individual’s place and date of birth are quoted as Newcastle in 1838.  On noticing that Bramber Road was named during the court hearing on the jewellery case, I was convinced that this was indeed the same person.

However, all of my efforts to trace the earlier history of the elusive Mr. Vergis have failed – probably because ‘Vergis’ – like Wells – changed his identity when it suited him to do so.

In my next post in this series, I’ll be on the trail of the elusive “Lizzie Ritchie”.

Sources for the above: