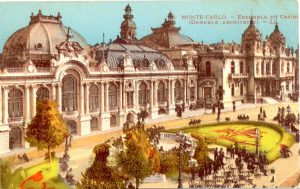 After he had broken the bank at Monte Carlo in late July to early August 1891, Charles Deville Wells had kept a low profile.  He had, however, placed anonymous classified advertisements in The Times and other newspapers requesting funding to the tune of £6,000 – equivalent to £600,000 today – to finance another trip to Monte Carlo.

At least two replies were from people from whom he had already obtained large amounts of cash through one of his fraudulent schemes.  And this time he managed to extract another few thousand pounds from each of them.

Wells reappeared at Monte Carlo’s famous casino on this day 125 years ago.*  His arrival was unexpected and went generally unreported.  He was, however, recognised by the local Reuter’s correspondent, who hurriedly dispatched a brief telegram to London — so brief, in fact, that all but the most observant readers would have missed it.

Mr Wells, the English gentleman who had the good fortune to win a sum of £32,000 some months ago at the gaming-tables at Monte Carlo, has returned, and is once more playing heavily.  So far, however, his luck has failed him, and he has opened the campaign by losing £4,000. [The Scotsman]

It was beginning to look as if Wells’ intention to return and break the bank had failed.  Had his famous gambling system let him down?  Had the casino found some way to thwart his plans?  Or was it just that his luck had run out?  The next few days would be decisive. 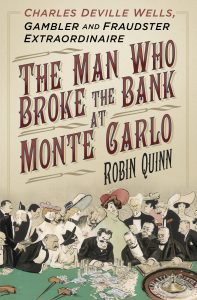 *In The Man who Broke the Bank at Monte Carlo, I state that he returned “on 4 November, or thereabouts” (p. 83).  Information which has come to light since the book’s publication suggests that he revisited the casino on 2 November.