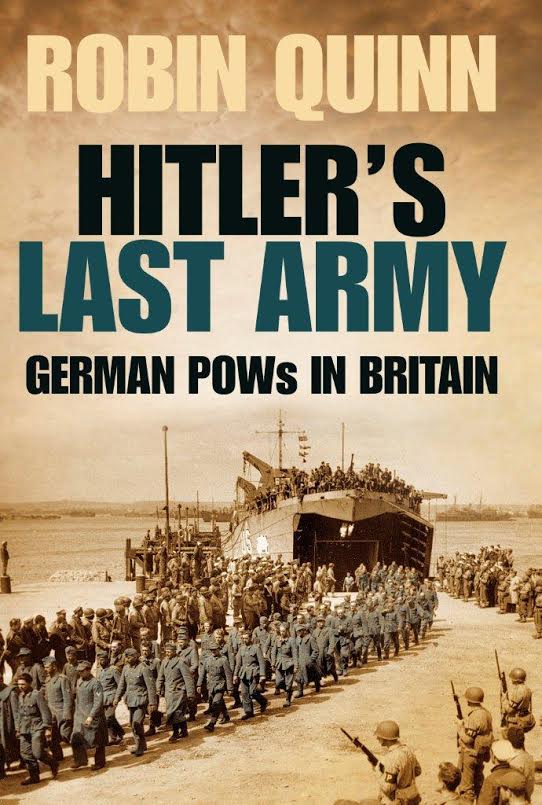 "Probably the best book on the subject in the last 20 years..."

The book draws on exclusive face-to-face interviews as well as on British and German official archives. It reveals how the POWs played a vital part in Britain’s post-war survival while, at the same time, their prolonged detention sparked political uproar. Its central theme though, is the human story of trust, friendship and even romance which developed between the POWs and the local population.

“… a very well written book retelling people’s experiences of being a German POW during and after WWII. The various stories are cleverly interwoven with background information taking one back to a different time which most of us have no knowledge or experience of. Highly recommended for anyone who just likes reading about other people’s lives and experiences. Couldn’t put it down until I’d finished it – very unusual for me."

The Moment of Capture

German soldiers, sailors and airmen had been conditioned to believe that they were invincible. 'Being taken prisoner was for the other side, not us,' as one man put it. But large numbers of Germans were captured by the Allies in North Africa and, later, in the wake of the D-day landings. The photo shows prisoners of war arriving at a British port in mid-1944 'We put our hands up – as high as they'll go – and walked toward the enemy very slowly,' says one German soldier who was captured the day after the invasion. 'The American soldiers were reasonably sensible but they wanted to pinch our watches and rings as souvenirs. They didn't treat us roughly at all. No pushing or kicking, they just wanted souvenirs.' Some POWs quickly adapted to their new circumstances: in a letter to his family one wrote, 'Treatment and food are good. Urgently need my big English dictionary.' [From Hitler's Last Army, chapters 1 and 3]
Great Escapes

Luftwaffe pilot Franz von Werra was shot down over south-east England in 1940 and taken prisoner. He escaped, smuggled himself on to a British airfield, and was actually sitting at the controls of an RAF Hurricane aircraft when he was recaptured just before flying back to Germany. Finally, he was sent to Canada, broke free again, and returned to Germany where he was decorated by Adolf Hitler himself. After the war, von Werra earned the title 'The one that got away' (after the book and subsequent film of his exploits). He is generally believed to be the only German combatant to make a "home run": but, as Hitler's Last Army reveals, von Werra was not the only German POW to achieve this, or even the first. That distinction goes to Walter Kurt Reich, pictured here being interviewed by an American journalist after escaping to the United States from Canada. [From Hitler's Last Army, chapter 4]
Helping The Tommies

At one point, Britain had some 400,000 German prisoners of war within its shores. While the country suffered the after-effects of war, including a failing economy and an acute shortage of labour, the government used the Germans as a workforce – primarily in agriculture. Their labour was so desperately needed that some were not allowed to return to Germany until late 1948; and, as Hitler's Last Army describes, others voluntarily remained in Britain for the rest of their lives. 'Opinions as to whether "We ought to help the Tommies to win the war" were very varied, and long and violent discussions took place,' recalls one former prisoner. A few had no such reservations: 'To be quite honest, right at the beginning when I first had to go to work when the war was on, all I thought was "Let's go harvesting, let's help here, let's get it going, let's build it up." We just felt "Let's get on with it". I always worked hard. The English were our cousins. We're related.' In the calamitous winter of 1947 the prisoners helped save Britain from economic collapse. A combined force of 7,000 men – British troops, Poles, and German prisoners – stood shoulder to shoulder clearing the deep snow drifts in northern England which had brought the region to a standstill. [From Hitler's Last Army, chapter 6]
What Are You Doing With A German

Fraternisation between the German prisoners and British civilians was strictly forbidden at first. In Shropshire a POW was prosecuted for having relations with a girl from the ATS (Auxiliary Territorial Service – the women's branch of the military). A court heard that the German had been discovered sitting on his bed and that the girl was hiding beneath the bed under a blanket. The defending lawyer said the accused spoke good English and had the opportunity to meet his opposite number in the ATS. He had been a prisoner since 1944 and had been 'given encouragement by an attractive Irish girl.' However, when the POWs left their camps to work on the land, and were later permitted to mix with the public, it was only natural that relationships would develop. 'It was difficult because some people looked down on us,' a woman explained in an interview for this book. 'There were two Fleet Air Arm stations, an RAF station, and an army barracks nearby: the usual comment was, "With all these Englishmen around, what are you doing with a German?" There's no real answer to that, is there? If there's an attraction there's an attraction' The illustration features a note from German prisoners to a WLA (Women's Land Army) girl whom they saw daily as she cycled to work. [From Hitler's Last Army, chapters 13 and 15]
Next Stop Germany
By 1946 some of the Germans had been prisoners for a long period – up to seven years, in some cases – with no immediate prospect of being allowed to return home. 'We wondered, "How long are we going to be here, how many years?"' a former POW reflects. 'The war had gone on and on and on, then when it was over we were never told when we would be repatriated – whether it would be in a year's time or two years.' Finally, in September 1946, Britain began a programme under which at least 15,000 Germans would be returned to their own country every month. But some of the prisoners – particularly those who had lost their families in the war, and those whose homes were now in the eastern zone of Germany – preferred to remain in Britain. 'I had the chance of going back but the Russians occupied that part of Berlin where my home was,' one man states. 'I was talking to my employer's son, and he said, "You don't want to go back to Germany under the Russians, you stay here. You can have a job with me as long as you like." And I wondered what would happen if I went back to the Russian zone of Berlin, and anybody realised I'd been with the Waffen-SS in Russia.' On learning about the Nazi concentration camps, one man made up his mind that he would not return to Germany. 'I felt ashamed to be German. I didn't want anything to do with them – I didn't want to go home. I couldn't go to the East and I knew nobody in West Germany. Mum kept writing, "Come home, come home," but I thought "Never!"' [From Hitler's Last Army, chapters 8 and 19]
Find Out More About Your German POW Ancestory
If your father, grandfather, or great-grandfather was a German prisoner of war in Britain, what information can you find about him, and about his time as a POW? When I wrote Hitler's Last Army I had originally intended to include a chapter for readers who wanted to trace a German POW ancestor. In the event, there was not enough space to do so, but this website now gives me the opportunity to set out some basic research hints. A National Archives guide guide on the subject of prisoners of war in British hands is an excellent starting point. The document contains sections on German and Italian POWs in the Second World War, including links to useful websites. It also lists sources available at the National Archives which, while they are unlikely to contain lists of named prisoners, can provide helpful background information on life in the camps both generally and at individual locations. I'll be adding to this section quite substantially in the future, so if you don't see what you want this time, come back and have another look in the weeks and months ahead, or get in touch through the Contact section of this website.