“I have often wondered about the fate of German POWs in and after the war – and this book has given a comprehensive and easily readable account.  Much enjoyed”  [Ebay customer’s review]

A reader of Hitler’s Last Army has sent me details of an article which recently appeared in the Great Yarmouth Mercury.  Builders renovating a house in the Norfolk village of Acle have found a Nazi swastika as well as slogans in German scratched on roof tiles.  It’s believed that German prisoners of war may have been used as a labour force to renovate the building during – or just after – the Second World War.  The building in question was the village telephone exchange at the time in question, and it’s entirely possible that POWs could have done work of this kind, especially on an official building such as this.  To see the original article click HERE

Zoologist and film-maker Heinz Sielmann (1917 – 2006) was the German equivalent of Britain’s David Attenborough.  His extraordinary life and accomplishments are celebrated in a documentary on the NDR TV network this evening at 19.15 British time (20.15 German time).

Sielmann served in the German army during WW2 and was taken prisoner by British forces immediately after the German surrender in May 1945.  He spent a short time in a POW camp in Egypt before being brought to the UK.

As author of Hitler’s Last Army, I was invited to take part in the programme to speak about Britain’s treatment of German prisoners of war in the immediate post-war years.  Evidently the British considered him to be a reliable person who could be trusted to play a role in a new, democratic Germany.  He was repatriated relatively early to a country which at the time was still under Allied control, and this probably gave him a career advantage which served him well a few years later in the new West Germany.

Back in September The Times published the obituary of Eduard Luedtke, who had just died at the age of 91.  The piece was headed ‘Last of the German prisoners of war who worked on English farms during the war and then settled here in peacetime’ (see my blog post of 1 November).  But in fact he was only one of the last.

When the obituary appeared, ex-POW Theo Dengel contacted The Times to let them know that he was still alive and kicking —“or just about”.  Elsewhere a woman anxiously called her grandfather – another former prisoner of war – to make sure he was OK.

Accordingly, a piece appeared in yesterday’s  Times (page 90), as part of the paper’s Armistice coverage.  Written by journalist Nigel Farndale, it mentions several of the surviving German ex-prisoners, while providing an excellent account of the 400,000 German POWs who were in Britain between 1939 and 1948.  Nigel used my book, Hitler’s Last Army, as a source of information for the feature and kindly acknowledged this in his piece.  Online version here.

The BBC Two drama, Close to the Enemy tells the story of a German scientist just after WW2 who is brought to Britain to help with the development of the jet engine.

The series is based on actual events.  The Times of 7 May 1946 reported:

German scientists, many of whom are leading aeronautical authorities, are coming to Britain to cooperate with British scientists in hastening the development of aero-dynamics, to solve the problems created by the jet engine … When Britain captured the air speed record of 606 m.p.h., jet engines had to be held back.  They could easily have gone on at a greater speed if the development in aero-dynamics and in the structure of aeroplanes had kept pace with the progress of the jet engine.  Since then the jet engine had forged ahead again and its development was going on by leaps and bounds …

… The scientists, all of whom are non-Nazis, will work at Farnborough, Hants, where they will live in a special hostel and will be waited on by German prisoners of war.  They have been working in German research stations and will be paid the same salaries as they received there.

… In the disarmament of Germany … it was decided that this vital realm of research should not be left intact in Germany … America, Russia, and Britain had now agreed that so many of these scientists should go to each of the three countries to cooperate with their own scientists.  About 25 would be coming to this country.

In Hitler’s Last Army I describe many of the other occupations in which German prisoners of war were engaged in Britain, both during and after the war.  Many people would be astonished to learn, for example, that trusted German POWs were given the task of compiling records of Nazis who were wanted for war crimes; other detainees had the job of keeping an up-to-date index of all POWs in British camps.

To watch Close to the Enemy on the BBC i-player, click here

On 17 September 2016, The Times published the obituary of a former German prisoner of war, Eduard Luedtke, who had died in Hertfordshire on 24 July at the age of 91.  (More info here).

The article was sub-titled: ‘Last of the German prisoners of war who worked on English farms during the war and then settled here in peacetime’.

While Mr Luedtke was one of the last surviving German POWs, there are certainly others still alive – as some of them were quick to point out!  The obituary has sparked quite a bit of interest, and my sources inform me that The Times will be publishing a feature on this subject in the very near future.

Up to 400,000 German prisoners were held in Britain between 1939 and 1948, and most of them were put to work in agriculture.  After the majority had been repatriated, some 25,000 chose to remain in this country as civilian farm workers.  For more info, see Hitler’s Last Army, especially Chapters 15-20.

Watch this space for updates on the projected Times article!

The winter of 1947 was extremely harsh with heavy falls of snow which threatened Britain’s fragile economy in those difficult post-war days.

One of the German prisoners held in Britain, Dieter Hahn, recollects: ‘They sent us out to shovel snow over Shap Fells.  It was a waste of time – in places with the snowdrifts all you could see was the tops of the telegraph poles.  We had to dig down to find the road.  We never cleared the thing.  That road, the old A6, was the only main road between England and Scotland over Shap Fells.  We shovelled the snow into lorries.  We had no extra clothes except maybe some gloves or a scarf.’

A factor that has shaped my writing style is my work as a radio producer and script-writer: this was my full-time occupation for over ten years and something I am still engaged in, though to a lesser extent than in the past.

A rule when writing for radio is to write as people speak.  So “it is” becomes “it’s”; “does not” becomes “doesn’t”.  In everyday speech sentences don’t always have verbs.  Really.  But although radio scripts are better when they closely follow the way we speak, this principle should be used in moderation in a factual book.  If overdone, it is likely to irritate the reader.

In matters of vocabulary, I prefer to err on the side of simplicity.  Few of us know the meaning of the words “imbricate”, “mangonel” or “zymurgy” and authors who manage to shoe-horn them into their writing are either crediting us with a wider vocabulary than we actually have or – more likely – are simply showing off.  And I feel the same way about writers who use Latin and Greek phrases and sayings.  As a schoolboy (long ago!) I had to study Latin, most of which I have never had to use and have now forgotten.  Greek was not taught at our school.  And a knowledge of these languages is even rarer today.  So remember, using obscure language is contra bonos mores — (contrary to good manners)!

Writing for radio taught me how to use interview material.  In a book – especially a historical one – the equivalent of an archive audio interview can be a quotation from a newspaper of the period, or a passage from another book.  I like to ensure that the narration guides the listener/reader through the story, providing a factual background for individual events and reminiscences.  The actual words spoken by witnesses are often best used to convey more subjective ideas, such as the speaker’s impressions and feelings:

After his unfavourable first impressions of Britain, Henry Metelmann also came to see things in a different light.  The turning point came when he was being moved to a camp near Romsey, Hampshire, and watched the countryside rolling by as he gazed out of the train window.  ‘In many ways England was a strange country.  That narrow channel of water seemed to have made much difference over the centuries.  Most things seemed small and old-fashioned.  The rows and rows of houses in the towns, with their small backyards and gardens, seemed cramped.  The people were friendly enough, but strangely reserved, and life generally had an unhurried flow, so very different from America and the Continent of Europe.  And yet, there was something likeable about it all … Those [prisoners-of-war] who lived out on the farms had very good relations with the farming people, and on the whole were treated very well … I was transferred to an out-camp in a beautiful old country house called Hazelhurst, near the village of Corhampton.  It did me much psychological good, as it gave me a feeling of freedom which I had not had for many years.’  [From Hitler’s Last Army, page 201].

The quotation also serves to amplify and reinforce what has been said in the lead-in, while at the same time introducing independent evidence for the author’s statements:

Even his longest-serving employees had no real idea who he was.  Monsieur Coste told a correspondent: ‘The man was a mystery.  He never spoke to anyone.  He didn’t have any friends, male or female.  He opened all his mail himself, and kept any money he received to one side.  He was out all day — I don’t know where.’  [From The Man who Broke the Bank at Monte Carlo, page 181]

If you have any research questions whatsoever, I’m always very happy to help, if I can.  The same goes for individuals whose relatives were POWs and who want to carry out family history research, or simply want to know what it was like in a British POW camp.  In a few cases I have detailed descriptions of individual camps. 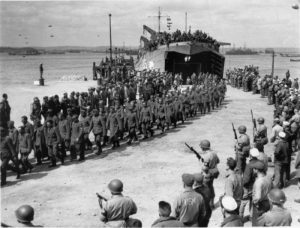