Not long after breaking the bank at Monte Carlo, Charles Deville Wells was arrested, having defrauded numerous people in a scam involving phony patents.  A woman named Frances M. Budd was one of the witnesses who testified against Wells at the preliminary court hearing.  She was currently living at Woolton, Liverpool, she said, but had previously resided in Worthing.  Wells had promised her annual profits of £15,000 (in today’s money) in return for an investment of £30 (£3,000 today).  She had had some difficulty raising £30 but finally sent Wells a cheque.  In common with all of Wells’ victims she did not receive a penny of the promised returns. 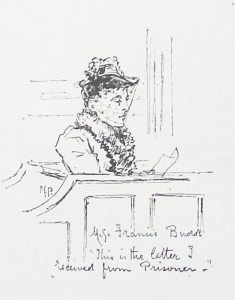 ‘Was £30 a large sum for you to lose?’, the judge asked.  She answered that it was.  She added that she had later visited Monte Carlo and, by coincidence, had seen Charles Wells at the gambling tables.

‘You saw him at Monte Carlo playing roulette?’ asked one of the lawyers.

‘He was playing trente-et-quarante [a card game]’ replied Miss Budd.

I was keen to discover more about Miss Budd; it should have been an easy task to find her in the 1891 Census at either Worthing or Woolton, but the search proved far more difficult than I could possibly have imagined.  Though there were very few people in the census with the name Frances Budd and middle initial ‘M’, none of them matched the details given in court.

But what if the person in question had been out of the country when the census was taken?

I noted that there was a woman named Frances Maude Budd, who appears in earlier and later censuses, such as 1881 and 1901, but whose name is missing from the 1891 Census.  Further research revealed that her sister was also absent from this survey, as were her cousin and the cousin’s husband.  A logical conclusion is that Miss Budd and her relatives had all left Britain for an overseas trip together.  It was not uncommon for reasonably well-to-do people to take extended tours of the Continent lasting weeks or even months, and it could well have been on this trip that Miss Budd visited Monte Carlo.

This was all circumstantial, however, and for a time I felt that I might never find any stronger evidence to back up my conclusions.  But then I stumbled upon an important clue.

A month after the 1891 census took place, a magazine editor, Henry Labouchère, described a letter he had received from a member of the public.  He does not disclose this person’s name but the similarity is so great that there can be little doubt that his correspondent was Miss Budd.  He notes that the letter was sent from ‘the Continent’; that the sum the writer had paid to Wells was £30 ; that she could ill afford the money at the time and that its loss had caused her some difficulty.  All of these facts correspond to the courtroom evidence.  The writer also stated that she felt unable to take legal action against Wells on her own, and that she had no male relatives to assist her.  This tallies with Frances Maude Budd, who had been orphaned since the age of 11, and whose family tree confirms that there were no close male relatives.  Finally, the writer says she would be happy to co-operate with other victims to bring a prosecution against Wells.  Miss Budd was indeed a witness for the prosecution, one of a relatively small number of victims who were prepared to come forward to prosecute Wells.  (There were many others who were clearly ashamed to admit that they had been duped).

Frances Maude Budd evidently got over her unfortunate experience.  The 1901 census shows that at the time she was employed as a tea-taster — an occupation which was exceedingly rare for a woman, and still is.  It appears that she later lived in London for a time, but little else is known about the rest of her life.  Records show that she died in a Bournemouth care home in 1952 at the age of 86.