We talked in particular about how the German POWs were gradually accepted by most members of the British public.  I’ve always felt that this says a great deal  for the Germans themselves: they are generally remembered as reliable workers who were respectful towards British civilians.  After five years of war, the Brits – understandably – had a bad opinion of Germany, and the prisoners had to make positive efforts to overturn that opinion.

The British, too, showed remarkable generosity and forgiveness.  One former POW told me how he was invited into an Englishman’s house not long after the war had ended, and was warmly received.  And the first thought to enter the prisoner’s mind was, “Why did we fight?”

Delighted to see that a reader has given Hitler’s Last Army a five-star rating on Amazon, together with a nice review!

For many of us this is our first day back at work after the Christmas and/or New Year break.  Not necessarily an exciting prospect, fo some, no doubt.  But I’ve been looking forward to it for some time as my first book, Hitler’s Last Army is released today.

The book focuses on the human story of the German prisoners of war who were held in Britain during and after WW2: I interviewed a number of former German soldiers and supplemented this evidence with material from the Imperial War Museum.  http://www.iwm.org.uk/collections-research

As a backdrop to this eye-witness testimony, I’ve referred also to the military, political and economic decisions which impacted on the lives of the POWs.

I think you’ll find the personal testimony of these men both fascinating and at times very moving …  but please do let me know what you think of the book, as I’d love to have your views, comments and suggestions!

The book is aimed at general readers – not just those with a specialised interest in the war.  But I suspect that some will have have a particular motive to read about the POWs – either because they were themselves a prisoner, or because a relative was.  I’d be glad to hear your story (or that of your ancestor) so please get in touch.  If you have any questions about German POWs that aren’t covered in the book, I may be able to help, or at least point you in the direction of some useful sources of information.  info@robin-quinn.co.uk 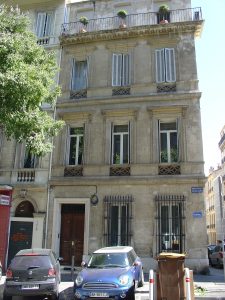 Spent several days in France last September researching my biography of Charles Wells, (The Man Who Broke the Bank at Monte Carlo).  We took in several cities, including Marseille, where Charles Wells lived for some years before becoming famous for his Monte Carlo exploits.  He lived with his parents at the house pictured here.  More from the photo album in future posts!